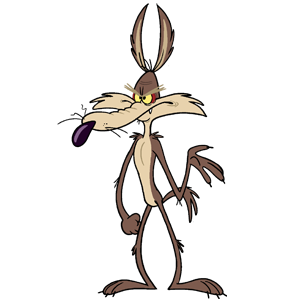 Wile E. Coyote is a character in New Looney Tunes. Being Bugs' annoying, know-it-all neighbor, he tends to use overly complicated technology to solve his problems rather than opting for more simple "primitive" methods.

In Wabbit, Wile E. closely resembles his original incarnation. Much like Bugs, he also has some minor changes to his apperance, such as having a longer snout and shorter ears. Wile E. also speaks in Wabbit where as he has mostly been silent in most of his appearances, but he did speak when he appeared with Bugs in some of the original Looney Tunes.

Retrieved from "https://newlooneytunes.fandom.com/wiki/Wile_E._Coyote?oldid=16535"
Community content is available under CC-BY-SA unless otherwise noted.