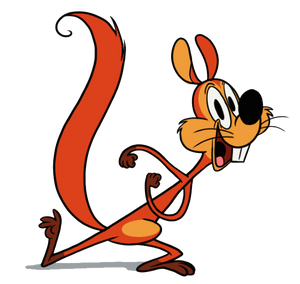 Squeaks the Squirrel is a major character on New Looney Tunes. He is Bugs' friend.

Squeaks' original appearance included two sets of buckteeth from the top and bottom of his jaws. His body was a little broad and his tail was enormous and bushy. But in the final concept, the shape of Squeaks' head is similar to Bugs Bunny's. His tail is much thinner. His body is now much slimmer yet has a not-so big belly. His limbs are skinnier. And he now has buckteeth located only in his upper jaw. His nose appears to be much rounder than before.

He communicates with squeaks, chirps, charades, and can speak a little. Bugs or other characters who talks to Squeaks, can interpret what Squeaks is saying.

Squeaks appears in most Season 1 and 2 segments that feature Bugs.

Retrieved from "https://newlooneytunes.fandom.com/wiki/Squeaks_the_Squirrel?oldid=16452"
Community content is available under CC-BY-SA unless otherwise noted.