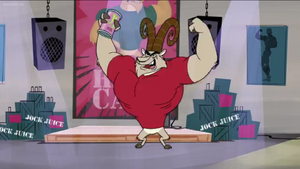 Rock Hardcase is a character exclusive to New Looney Tunes. He made his debut appearance in the episode Bugs of Steel.

He is a cream colored goat with a red shirt, bushy eyebrows and large curled horns. He appeared to be extremely muscular, but toward the end of "Bugs of Steel", he was revealed to be small and scrawny with small, pointed horns with a nasally voice.

Retrieved from "https://newlooneytunes.fandom.com/wiki/Rock_Hardcase?oldid=15730"
Community content is available under CC-BY-SA unless otherwise noted.