New Looney Tunes Wiki is a wiki focusing on the Cartoon Network and Boomerang show, New Looney Tunes. The show premiered on September 21, 2015 on Cartoon Network, but has since been moved to Boomerang's channel and their SVOD. The show is based off of the original shorts of Looney Tunes and stars Bugs Bunny, Daffy Duck, and Porky Pig. Classic foes, including Yosemite Sam and Wile E. Coyote return. Likewise, Bugs and Daffy faces new foes, but Bugs will have some help from new friends, such as Bigfoot and Squeaks the Squirrel. 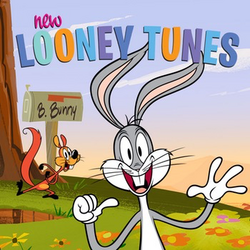 " Here's the thing: I don’t care what they do to that pig. If they keep bringing me back, I’m employed. So they can beat the heck out of Porky, they can make bacon out of Porky, I don’t care. It’s actually fun. Conflict is a fun thing to play."
—Bob Bergen (voice actor of Porky Pig) in an interview with ToonZone.

Retrieved from "https://newlooneytunes.fandom.com/wiki/New_Looney_Tunes_Wiki?oldid=14657"
Community content is available under CC-BY-SA unless otherwise noted.