The remaining episodes have been released on Boomerang's SVOD service before airing on television. On February 8, 2018, it was announced that the show would be ending after the third season, which hasn't aired anywhere around the world yet.

On September 3, 2019 reruns of the show began airing on Cartoon Network along with The Tom and Jerry Show.

Most production episodes of New Looney Tunes contains two shorts, with four production episodes in Season 2 taking up an 11-minute period. Season 1 episodes feature Bugs Bunny from the Looney Tunes as the main character. Other characters, such as Wile E. Coyote and Yosemite Sam, show up to annoy him. Added in are new characters, a squirrel named Squeaks and a childlike version of Bigfoot, who come to befriend Bugs. Likewise, Bugs faces new villains, but not without the help of his friends. 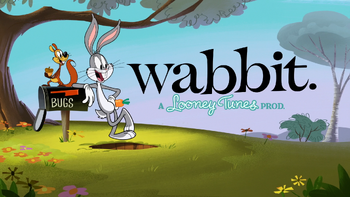 The intro starts as Bugs slides down his rabbit hole, while the theme song plays, and other various scenes of the show's episodes are seen. The intro concludes with Bugs chewing a carrot, with Squeaks beside him, as the logo for the series appears on the right side of the screen.

There have been four different arrangements of the theme song. A fifth arrangement was made starting with Season 2.[1]

For Season 1, the episode ends with a black card with the words "Wabbit: A Looney Tunes Prod." or "New Looney Tunes" if watched on Boomerang SVOD.

For Season 2, there is no outro card. 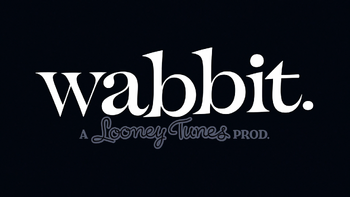 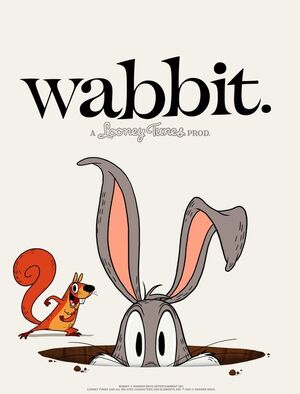 New Looney Tunes was announced in March 2014, along with other reboots of Warner Bros. classics, such as Be Cool, Scooby-Doo! and The Tom and Jerry Show, under the name Wabbit - A Looney Tunes Production. Sam Register, promoted to president of Warner Bros. Animation and Warner Digital Series a month prior, will be its supervising producer.

The previous installment of the Looney Tunes franchise was The Looney Tunes Show, but the show was cancelled after two seasons, containing twenty-six episodes for each season. Warner Bros. acknowledged that The Looney Tunes Show strayed away from format and the Bugs and Daffy that people fell in love with and made them popular back in the day.[2] Rather than making the series an animated sitcom, like The Looney Tunes Show was, the producers decided to go for an approach that would make the characters work, focusing on sight gags and the craziness that made the original shorts so critically acclaimed. The time for each short was also cut down to five minutes (down from seven minutes in the original shorts), which was similar to how Disney cut down the time for their Mickey Mouse's shorts.

The concept of the show, according to producer and writer Matt Craig, was to modernize it into the twenty-first century "with classic Bugs Bunny in modern day situations." The same ideas in the thirties, forties and fifties are still there, but "we've time-traveled him" with more emphasis on storylines about cell phones and tablets, with less on coal mining.

The show was previewed in an article from a Comic-Con edition of TV Guide, stating that the show was written to match the tone of the Looney Tunes shorts. However, the producers sought to avoid their clichés—in particular, the anvil gag. The crew placed their emphasis on writing original stories, as well as devising "modern heavy objects to cause pain," according to producer and writer Erik Kuska. Bugs' villains may include "barbarians and ninjas and terminators," Kuska said, describing Bugs as "at his best when he's up against a really good adversary."

The show was also restricted from using weapons that the original shorts were able to use, particularly the guns. In shorts featuring Yosemite Sam, guns were rarely pulled and Elmer Fudd's role in the series is minimal, which backed up Kuska's comment where he said that Elmer Fudd "may not be the man" to be in the shorts anymore. The writers thought of workarounds and came up with jokes for the characters that avoided the modern prohibitions.

Bugs Bunny was no longer the top dog and above it all, according to Matt Craig [3] in an interview. The producers noticed that Bugs had strayed from his original persona in the past twenty-thirty years of appearances in media, so they decided to go back to the Tex Avery/Chuck Jones style of lunacy that most audiences were familiar with, according to Matt Craig [4] in another interview.

" Yeah, it has a little more edge to it. I think one of the things we did was that we kind of rolled back to the rascally-ness of Bugs. You know, he’s a bit of a stinker, as he likes to point out. … I think that as other people have tried to do other incarnations, like any icon they start to clean him up and wash him out. We just went back to letting Bugs be Bugs and I think that’s part of the success of the show."
—Gary Hartle (producer) in an interview with CBR.

" Here's the thing: I don’t care what they do to that pig. If they keep bringing me back, I’m employed. So they can beat the heck out of Porky, they can make bacon out of Porky, I don’t care. It’s actually fun. Conflict is a fun thing to play."
—Bob Bergen (voice actor of Porky Pig) in an interview with Toonzone.

Meanwhile, new characters such as Jack were introduced, but Jack was retired after a handful of appearances, due to similarities to previous foils to Bugs in the series, such as Yosemite Sam. A whole "new universe of Looney Tunes characters" were introduced in the first season, because the rights for majority of the original characters were unavailable for usage. Bugs Bunny was the primary focus of the show, while Yosemite Sam, Foghorn Leghorn and Wile E. Coyote also had prominent roles. Daffy Duck, Porky Pig, Tweety, Sylvester, and Elmer Fudd are also introduced later in the show, the first two joining the main cast for the second season.

Season 1 was slated for a Fall 2015 release. On January 5, 2015, Boomerang United Kingdom released a video showing the first sneak peek of the show. The show premiered on Cartoon Network abruptly on September 21, 2015, with less than a week's notice. Ratings ranged around one million for the first few weeks of the season, with the early intention for the show to be a sneak peak and premiere in its natural home, Boomerang, when it was October 2015. However, Cartoon Network decided to air the show simultaneously on Cartoon Network and Boomerang, due to the impressive ratings.

Ratings began to significantly drop and the show was pulled from the Cartoon Network rotation in November 2015 and only three episodes premiered the following year before removing the show completely from the lineup. Despite the lack of premieres in the United States during 2016 and 2017, New Looney Tunes was renewed for a second and a third season due to the popularity internationally, according to Bob Bergen.[7] The third season will be the final.

Before the series premiered, it was renewed for a second season.

In January 2017, it was revealed that amidst the fourth introduction change that the show was retitled "New Looney Tunes," dropping all references to the original titles: "Wabbit - A Looney Tunes Prod." in the USA and Brazil and "bugs!" in Europe.

Warner Bros. Entertainment, Inc. or Warner Bros. is the company in charge of the production of Wabbit - A Looney Tunes Production. They also produced the original Looney Tunes shorts, the 2011 reboot series, The Looney Tunes Show and the 2003 movie, Looney Tunes: Back in Action. The logo appears briefly once the credits conclude.